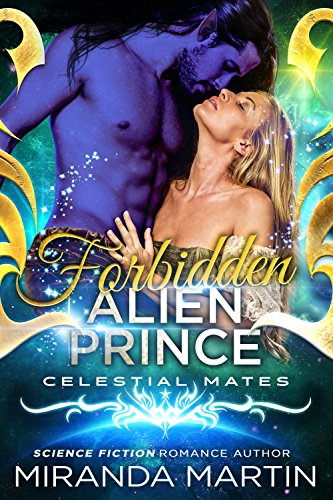 Big, blue, ripped as sin and totally off limits.

Drevakin Lo'ara, prince of a minor noble house, is desperate. He goes to the Celestial Mates dating agency in the hopes of fulfilling his dreams of finding his fated mate. The only problem is, unknown to everyone, the Celestial Mates agency has agreed that if a match is found, she goes to the prince of a major house. He has no idea that Clara Rivera is his match when a chance encounter leaves him begging to touch her luscious curves.

Clara Rivera lost everything when her fiance was killed in the line of duty. In a last ditch effort to escape the empty void of loneliness, Clara is convinced by her support group bestie to try out Celestial Mates. But when she arrives on Alva, it all seems to be a huge mistake. The prince she's matched to is cruel and heartless and she wonders if she should give up and go back home when she meets sexy, gorgeous Drevakin. He makes her realize there might be way more reasons to stay.

Drevakin must win Clara's heart despite Alvan politics and the danger it puts his beloved people in. Her intended match is ruthless, cold, dangerous and will stop at nothing, not even war, to force her back. The taste of her forbidden fruit is deliciously filthy and if they're caught there will be hell to pay but Drevakin can't stay away.

Wet for the Alien Prince is a Celestial Mates full-length novel of forbidden love. It is a completely standalone part of the Alva series with a happily-ever-after ending. If you enjoy hot, sexy, alpha aliens desiring strong, independent Earth women and steamy romance of the cold shower kind, then this is for you!