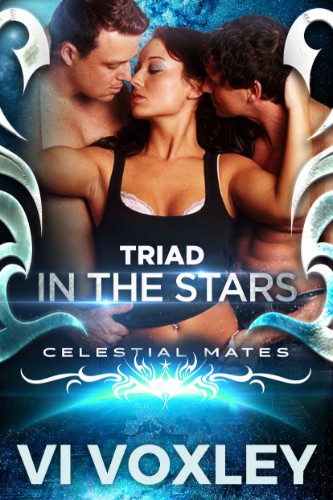 Triad in the Stars

How many broken hearts does a woman have to suffer through? Chloe knows she's done with all of that. From now on, it's going to be nothing, or love everlasting. No inbetweens. But... as a curvy lawyer in New York, where talk is cheap and love is cheaper, how's she supposed to find that? Thank the stars that there's a service for that...

Elias and Vanor both have 'king' written all over them. King of the Haverins, that is. The two warriors, decorated and admired, have been bred and groomed to take over the desired throne. The only thing both of them want with more passion is to see the other dead through their own sword. So when a woman that can only be the mate of both of them shows up right in the middle of their duel to the death, things are bound to get a hell of a lot more complicated.

Travelling through space and time because of an alien matchmaking service seems like the least of Chloe's problems when she's faced with two excruciatingly hot men, who hate one another with almost as much passion as they love her. But maybe there's a way to right all the wrongs... Maybe she can have her cake and eat it too.