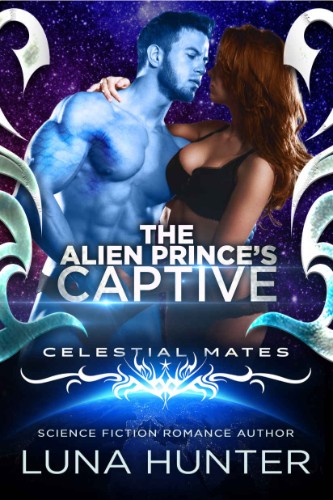 Amelia is having the worst day of her life. She just found out her boyfriend is cheating on her with her best friend, and on top of that, she just lost her job. When she receives a mysterious email from the Celestial Mates Dating Agency, promising a romance out of this world, she clicks accept without a second thought.

An exotic, mysterious hunk is exactly what she needs right now. What she doesn't expect is to be drawn into an alien world, where gorgeous Thalanil and fearsome Qroqs do battle -- and she is the prize!

Tau Thalanil is the prince of his species, and the last of his line. The tall, blue alien warriors are losing the war, and Tau is in desperate need of an heir. At first he is skeptical of the Celestial Mates, but the moment he lays eyes on Amelia's luscious curves, he is sold. She is his fated mate, and he must have her.

When the Celestial Mates open up a portal to Earth, the Qroq strike and kidnap Amelia, ripping her from Tau's grasp. If the Thalanil go too long without their fated, they go feral and lose control of their inner dragon. Can Tau reclaim his mate before it's too late?

The Alien Prince's Captive is a standalone SciFi Romance novel. No cliffhanger, happily-ever-after guaranteed! If you like growly, alien warriors and the strong Earth women they go crazy for, this is the book for you!