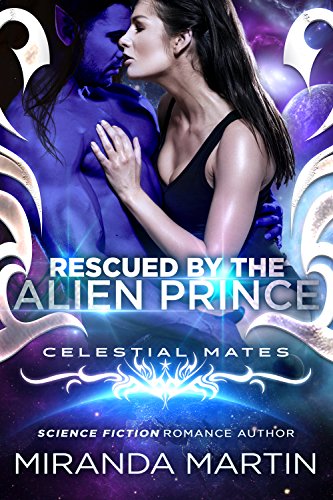 Rescued by the Alien Prince (The Alva #3)

Out of the frying pan and into the fire.

Senator Ling Richards is passionate about saving the Earth. So when she refuses to allow the latest mega-corporation the right to destroy one of the last nature reserves, it puts her very life in danger. To get their way, they'll kill Ling and all her allies. The only safe place to turn is off-world and the Celestial Mates dating agency offers the perfect opportunity. Ling can't say no when she sees the holographic picture of the seven foot tall, blue alien with stunning gold eyes.

Prince Naefaren Viir has been making powerful enemies with his desire to change the status quo and offer a better future for both Major and Minor houses. His foes see the perfect opportunity to force him to step down as head of House Viir by capturing and holding hostage his vulnerable human female. Even before meeting Ling, he knows he'll do anything, even give up his title, to rescue her.

Naefaren desires to mark Ling as his own for all to see with his mating bite, to make her his Pari, but sometimes the overprotective alien has to shield her from all dangers, even himself. Losing her would shred his heart to pieces and when his enemies use that against him, it threatens everything.

Rescued by the Alien Prince is a Celestial Mates full-length novel. It is a completely standalone part of the Alva series with a happily-ever-after ending. If you enjoy hot, sexy, alpha aliens desiring strong, independent Earth women and steamy romance of the cold shower kind, then this is for you!