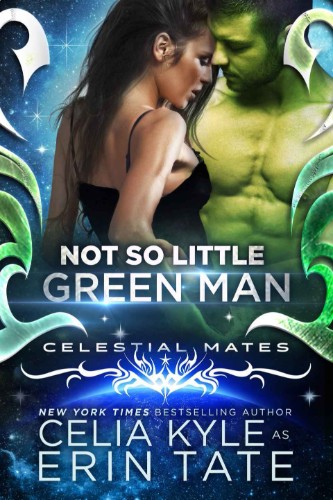 What’s a big, bad (sometimes green) alien to do when he wants a mate who isn’t motivated by greed? Contact Celestial Mates. After all, their business is romancing the galaxy.

Creeping up on the age of bearing service, the Earth government wants Jassa to have a baby and then hand it off for a family to raise. Well, Jassa wants her own family. Which means calling Celestial Mates. One questionnaire, a bit of blood, and a race to get away from the Department of Population, and she’s got her wish.

In the form of a tall, sexy as hell, and occasionally green alien—Vroe, the High Warlord of Vialea.

Vroe aches for a mate who doesn’t see him as a rise in status. He wishes for warmth and affection and goes to Celestial Mates to find… Jassa Marizen. Yet his ideas about mating—Jassa mating him and forever being known as only Vrya—collide with hers. She doesn’t want to lose her past. He wants her to embrace her future.

Then there’s this other woman… she just wants Vroe to herself.