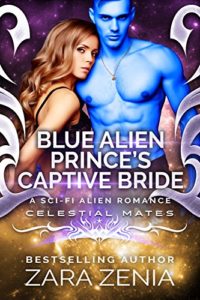 An alien prince with one mission: to find a bride and have children to save his family legacy.

Marissa is ready to meet the man of her dreams. The shy librarian hasn’t had much luck in love, so when her best friend suggests she sign up for Celestial Mates, she decides — why not?

Unfortunately, they neglected to mention she’d have to take a space ship to her first date. Obviously there’s been a huge mistake.

Kadic, the alarmingly sexy dark-blue alien prince from the planet Alpazon, can’t possibly expect to marry her. They don’t even have the same… the same… parts.

But under a midnight sky filled with two moons and a million twinkling stars, the seductive alien’s naughty tongue holds her captive in a haze of ecstasy, and makes her question whether or not she’s ready to leave everything she’s ever known to join his alien world.

Prince Kadic needs a mate. If he doesn’t have children before his parents pass away, his tyrant older brother will ascend to the throne and will destroy their family legacy. Desperate to be married, he contacts Celestial Mates who assures him they will send a suitable bride. He’s more than impressed by Marissa’s sensual curves and innocent smile.

But when she instantly rejects him, he confines her to the palace. Will he be able to convince her of his love and devotion? Or risk planetary annihilation at the hands of his brother?

Blue Alien Prince’s Captive Bride is part of the Royally Blue - Celestial Mates series and is a full-length science fiction romance novel. There are NO cliffhangers, NO cheating, and a guaranteed happy ending! 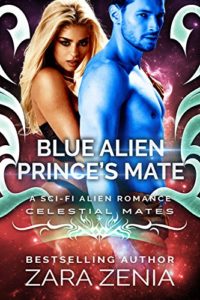 An alien prince. A human mate. One obstacle standing between them and happiness.

Cindy was in an abusive relationship and managed to leave and get a job. For the past two years she was struggling to make ends meet. Now, she just lost that job and tries to ask her sister to help who is reluctant to due to her controlling husband.

She feels she has no other choice but to apply through Celestial Mates as a mail order bride. Little does she know that the title of the ad, “Out Of This World” will involve her leaving Earth and living her life with an alien.

Togtulir is an alien shifter prince. He saw his father die in battle and fears that he won’t be able to follow in his father’s footsteps. His people looked up to his dad, but Togtulir was a playboy who never took his role seriously.

His people feel that they are in despair and are desperate to have a new leader. Togtulir believes that the only way that he can prove that he has changed is to settle down and find a wife. Only problem is he can’t find a suitable bride on his own planet, so he decides to get a mail order bride through the Celestial Mates agency.

Cindy is surprised that she is on an actual alien planet. She originally thought she was just on an island back on Earth. And she falls in love with Togtulir. But then he shows his true, blue, alien form and she’s not sure how she feels. On top of that, there’s someone from Togtulir’s past, his childhood friend, that doesn’t want him marrying Cindy.

Will she be able to handle living on an alien planet? Will Cindy and Togtulir be torn apart by his childhood friend? Will he be able to have a royal wedding he dreams of to bring peace back to his people?

Blue Alien Prince’s Mate is part of the Royally Blue - Celestial Mates series and is a full-length science fiction romance novel. There are NO cliffhangers, NO cheating, and a guaranteed happy ending! 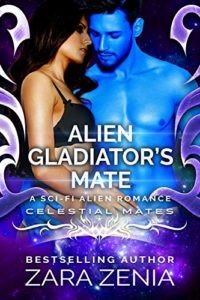 Can these two mates live together in harmony?

Carina is tired of working hard with manual labor to help serve the now broken down Earth’s society. She wants to have new experiences. She knows the only way off the planet is through Celestial Mates, the mail order bride service, so she decides to sign up.

She finally gets selected and gets picked up by a spaceship to take her to her new life. Little does she know, one of her friends who has always had a crush on her, climbs aboard the spaceship as a blind passenger since he doesn’t want to lose her. But he’s captured and sold as a slave for the gladiator arena for the aliens.

Gar’zul was once the commanding warrior officer in the Delgar forces. But when his own family is killed in family fire, he decides to leave the force and become a gladiator in the interstellar fighting arena.

He misses his family and since he can never get his own family back he decides to create one of his own. Though he has no intentions of looking for someone himself. So he decides to go through Celestial Mates to find him a human wife from Earth.

Carina needs to figure things out with her new mate, the big blue warrior, Gar’zul. Getting adjusted to the new life in the new world isn’t easy.

Will Gar’zul be able to get along with Carina enough to keep her as his mate and wife? Will Carina be able to tolerate her mate’s career choice? Will she be able to save her friend from his likely death inside the arena?

Alien Gladiator’s Mate is part of the Celestial Mates series and is a standalone, full-length science fiction romance novel. There are NO cliffhangers, NO cheating, and a guaranteed happy ending! 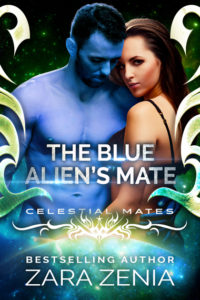 Are they meant to be mated?

Urie is a leader and general of the Ura-Than race. He has no time to find a mate to create an heir to replace him as leader one day.

Urie gets his friend Reli of the Celestial Mates agency to find him a mate. The only thing is that Reli’s agency uses some methods that probably would not be accepted in certain cultures, such as bidding.

Samantha was the one he lusted. She was just a human, but the most beautiful one he had ever seen. He needed to get her. At any cost. Urie knew he had to outbid the rest to get her.

Getting adjusted to her new life is hard for Samantha. Urie has to keep on planning how to defend his own people against the enemy, X, and he soon learns of a possible traitor amongst his own may even go all the way to the top of his most trusted generals and captains.

What will happen between these two mates? Is their fate sealed? Or will one of their needs have to give if push comes to shove?

The Blue Alien’s Mate is part of the Royally Blue - Celestial Mates series and is a full-length science fiction romance novel. There are NO cliffhangers, NO cheating, and a guaranteed happy ending!