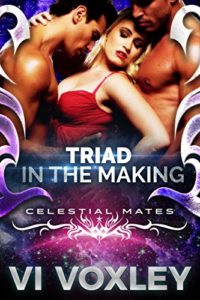 There's a wrong and a right... but can there be two rights?

Joanna Smith didn't expect time and space to warp around her. Really, who does? But when a dapper gentleman suddenly pops into existence during a bloody firefight, she doesn't really have time to question it. A hop, skip and a teleportation or two later, she's in the middle of a love triangle with two warlords deadlier and hotter than sin, and a reptilian race out for her blood.

Just another day in the life, right?

Eredin Greole and Rago Merive are no one's definition of friends. The Haverin lords have only one thing in common - their desire to be Templars, the holy protectors of their warrior race. But a Templar is not permitted a mate, the one thing every Haverin desires. When fate drags the bitter rivals to the opposite end of the universe to meet their fated right in the middle of their duel, something's got to give. Is it the feud, or is it the bond they're fated to share?

Or maybe the Lord Templar will kill them all before they even have to decide. Or the slithering reptilians. Options galore.

Triad in the Making is a Celestial Mates series stand-alone novella.A dash of matchmaking, a hint of the forbidden, and plenty of steam make for a sci-fi romance quick read you won't want to miss!

How many broken hearts does a woman have to suffer through? Chloe knows she's done with all of that. From now on, it's going to be nothing, or love everlasting. No inbetweens. But... as a curvy lawyer in New York, where talk is cheap and love is cheaper, how's she supposed to find that? Thank the stars that there's a service for that...

Elias and Vanor both have 'king' written all over them. King of the Haverins, that is. The two warriors, decorated and admired, have been bred and groomed to take over the desired throne. The only thing both of them want with more passion is to see the other dead through their own sword. So when a woman that can only be the mate of both of them shows up right in the middle of their duel to the death, things are bound to get a hell of a lot more complicated.

Travelling through space and time because of an alien matchmaking service seems like the least of Chloe's problems when she's faced with two excruciatingly hot men, who hate one another with almost as much passion as they love her. But maybe there's a way to right all the wrongs... Maybe she can have her cake and eat it too.